Primates Are Not Pets

Demand that Facebook and Google make it easier to report that videos and images featuring pet apes and monkeys are cruel. Also ask them to remove all reported content featuring pet primates.

A confirmation email and updates about primates in social media will be sent to the email you provide. You may unsubscribe at any time.

If you have any problems adding your name to the letter, please contact info@pasa.org.

To Mark Zuckerberg and Sundar Pichai,

I am shocked and disappointed about how difficult it is to report posts featuring animal cruelty on Facebook, YouTube, and Instagram. I am even more appalled that posts containing animal exploitation remain on your social media sites even after they have been reported by concerned users.

While videos and images featuring wildlife as pets may appear cute or funny, they depict animals who are suffering. Animals who are taken from the wild or ripped from their mothers days after birth. Animals whose teeth have been ripped out and are suffering from health problems and psychological damage.

Sadly, apes and monkeys frequently feature in these posts. Due to their high level of intelligence and their similarities to humans, primates are popular as exotic pets. The traits that make them desirable as pets are also the reasons why they should never be kept in captivity. Primates are highly social animals and need to be with their families to live happy and healthy lives. Keeping them as pets is depriving them of their basic needs.

I respectfully urge you to implement the following measures to show you do not condone the mistreatment of animals:

• Provide a clear way to let the users of your social media sites easily report content containing primates, and other wildlife, as animal cruelty.
• Take action when such content is reported, by removing content showing wildlife as pets.

I beg that you help to stop the horrendous pet trade and show you care about the suffering of animals.

For the first 10 years of his life, Cozy only knew suffering. Bred in a lab in the U.S., he was subjected to medical experiments before being sold and taken to Italy. His life in Italy was no better than the lab – he was forced to pose for photos and do tricks for entertainment. He received repeated beatings to his head resulting in brain damage and was castrated.

After his owner passed away, Cozy was forced to live in a small cage for years. When he was rescued, he was so weak that he couldn’t even walk or climb. Since then Cozy’s health has improved, but it has been a long road for him to find his way at his new home at PASA member organization, Chimp Eden. Due to his castration and his brain damage, he struggled to learn how to behave like a chimpanzee and will always be a submissive member of his group.

Thankfully, although it took years, Cozy has learned to integrate with his group and is now fully accepted by the other rescued chimps at Chimp Eden.

HOW THE PET TRADE WORKS

Whether stolen from the wild, or born in captivity and taken from their mothers within as little as three days, pet primates never have the opportunity to live a normal life. They are deprived of all that should come naturally to them – an adequate diet, the chance to bond with their mothers and social groups of their own kind, and the opportunity to raise families of their own.

Many people are unaware that pet primates tend to become aggressive when they reach adolescence. To reduce the damage they can inflict, their teeth are often ripped out. Some are forced to spend the rest of their lives in small cages with little stimulation, leading to psychological trauma. Some suffer from deformities and health issues due to their confinement.

While videos and images of apes and monkeys dressed in costumes or diapers, playing with dogs or performing tricks may appear cute, these animals are suffering and living a life in misery.

Sadly, these videos and images present a myth that apes and monkeys make good pets. These posts on social media are fueling the popularity of the exotic pet industry and giving the impression that these animals are all well cared for and fun to keep as companions. This could not be further from the truth.

Currently, there is no clear way on social media to report content featuring pet primates as inappropriate. Even when reported, no action is being taken to remove the content from these sites.

Join PASA in asking Facebook and Google to provide a clear way to flag videos and images featuring pet apes and monkeys as animal cruelty. Insist that Facebook and Google act on these reports by removing this content. Demand that they stop supporting the barbaric pet trade.

Primates as Pets – Cruel, Not Cool 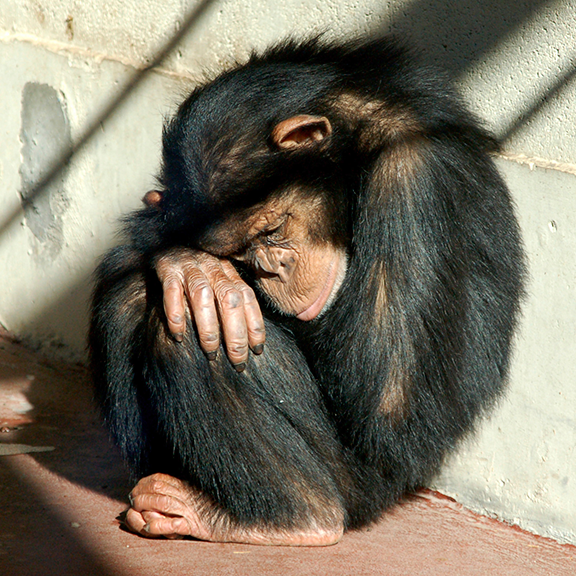 Did you know that primates kept as pets often suffer from malnutrition, deformities and mental anguish? In the U.S. alone, it is estimated that up to 15,000 primates are being kept as pets. Unlike dogs and cats, apes and monkeys are not domesticated animals. They belong in the wild with their mothers and family groups to develop normally and to live fulfilling, healthy lives.

We’ve all seen viral videos and images of pet primates. Although they may seem cute and we all know people who share these images, every one of these animals is a victim of a multimillion dollar industry founded on suffering. Baby primates are torn away from their families, their teeth are ripped out, and after they’re sold online they may never see another member of their own species again. These photos and videos need to be reported as cruelty.

Urge Facebook and Google to show they do not support this inhumane trade. Demand that they:

Will you help us get to 150,000 signatures to remove suffering apes and monkeys from social media? Sign the letter and share it with animal lovers like you.