Meet two women leading the fight to save great apes and monkeys.

Another busy day is starting for Lina Adolphine Nturubika. She’s the wildlife veterinarian at Lwiro Primate Rehabilitation Centre in the Democratic Republic of Congo (DRC). As that country’s first female wildlife vet, Lina is a pathbreaker. But she hopes her example inspires young women in her community to follow her lead. In Uganda, Dorothy Basemera is working on plans for visitors to Ngamba Island Chimpanzee Sanctuary, where she serves as the guest relations and partnership officer. Together, Lina and Dororthy represent a new generation of women leading the charge to protect the continent’s iconic great apes and monkeys.

Inspired by Role Models to Become One

Lina grew up in the eastern DRC, a region with a history of rebel attacks. Her father, a human rights activist, was murdered when she was just ten years old. But he imparted a love of primates to her and her dream of becoming a wildlife vet was born.

“I have loved primates since I was a kid,” she says. “I witnessed the suffering of primates’ trafficking with my own eyes. Since then, I wanted to dedicate my life to conservation and animal welfare.”

The road to becoming a wildlife veterinarian was not an easy one, however. The veterinary university was far from her village and the family’s financial resources were limited, so she started to study medicine. But, four years later, when a new veterinary college opened up closer by, Lina enrolled.

“I had the opportunity to learn about the work that Dian Fossey and Jane Goodall did for the primates,” she says. “They showed me that my dream was possible to achieve as a woman too. They gave me the strength I needed to believe in myself.”

Now, on her daily rounds, she is called the “chimp mama” by the team at Lwiro, a name Lina is proud of. She says there is no place she’d rather be than with the animals and making sure they have what they need to thrive.

“When she came to Lwiro, we were impressed by her expertise coupled with her love for the animals,” said Itsaso Velez del Burgo, director of the center. “She is our best ambassador, able to explain the challenges chimpanzees and monkeys face in ways that really connect with people. And of course, she’s a hero to the young girls who visit us. A true role model.”

Lina was named the 2020 Siddle Marsden award winner by the Pan African Sanctuary Alliance (PASA). PASA represents 23 primate sanctuaries and wildlife centers across Africa, and the award winner is selected by the PASA board of directors. It recognizes the exceptional talents of Africans working in the Alliance.

When asked what her hope is for the future of conservation in her country, she thinks for a moment.

“My dream,” she says, “is that in the future generation, there will be plenty of woman working in conservation. I believe the conservation of the nature and the animals in the DRC will require women in high decision taking positions.”

From Tour to Career

Dorothy Basemera, too, found her passion for conservation early on.

“I began working with the Ngamba Island Chimpanzee Sanctuary and Wildlife Trust in 2014,” Dorothy says. “I started as a volunteer at the sanctuary. This was driven by the fascinating stories shared by the guide during my first visit in 2012 as a student.”

When she went back to her university, Ngamba Island was her first choice for an internship – and Dorothy was thrilled when she got it. For three months, she learned the fundamentals of animal care and came to have a special love for the sanctuary’s chimpanzees, an endangered species. She decided to stay on after the internship and worked as a volunteer. In this capacity, she took on management of a flock of parrots that had been rescued from Bulgaria, and continued working with chimps.

In 2015, however, her career was transformed when she won a Young Conservation Leader grant from the African Wildlife Foundation. The award allowed her to take part in a Disney Cultural Exchange Programme. Dorothy served as a cast member in Kidani Village at Saana, Florida, which was a life-changing experiencefor her.

“With the skills I learned from Disney,” she says, “I have been able to manage guests, fundraising, volunteers, partners and donors. I focus on offering them a worthwhile experience at every stage of their engagement with us.”

Dorothy is also a recipient of PASA’s Norm Rosen Leadership Grant – the first woman to receive this award. The grant runs for three years and provides opportunities for emerging leaders to learn from each other and from current sanctuary directors and managers. This professional development helps build a pipeline of talented people to continue the life-saving work of wildlife centers and sanctuaries.

“Conservation has been rewarding,” she says, “and all the more so while speaking for our closest relatives, the chimps, whose existence is dependent on our actions as humans. I believe in life-long learning. I aspire to be a conservation activist.” 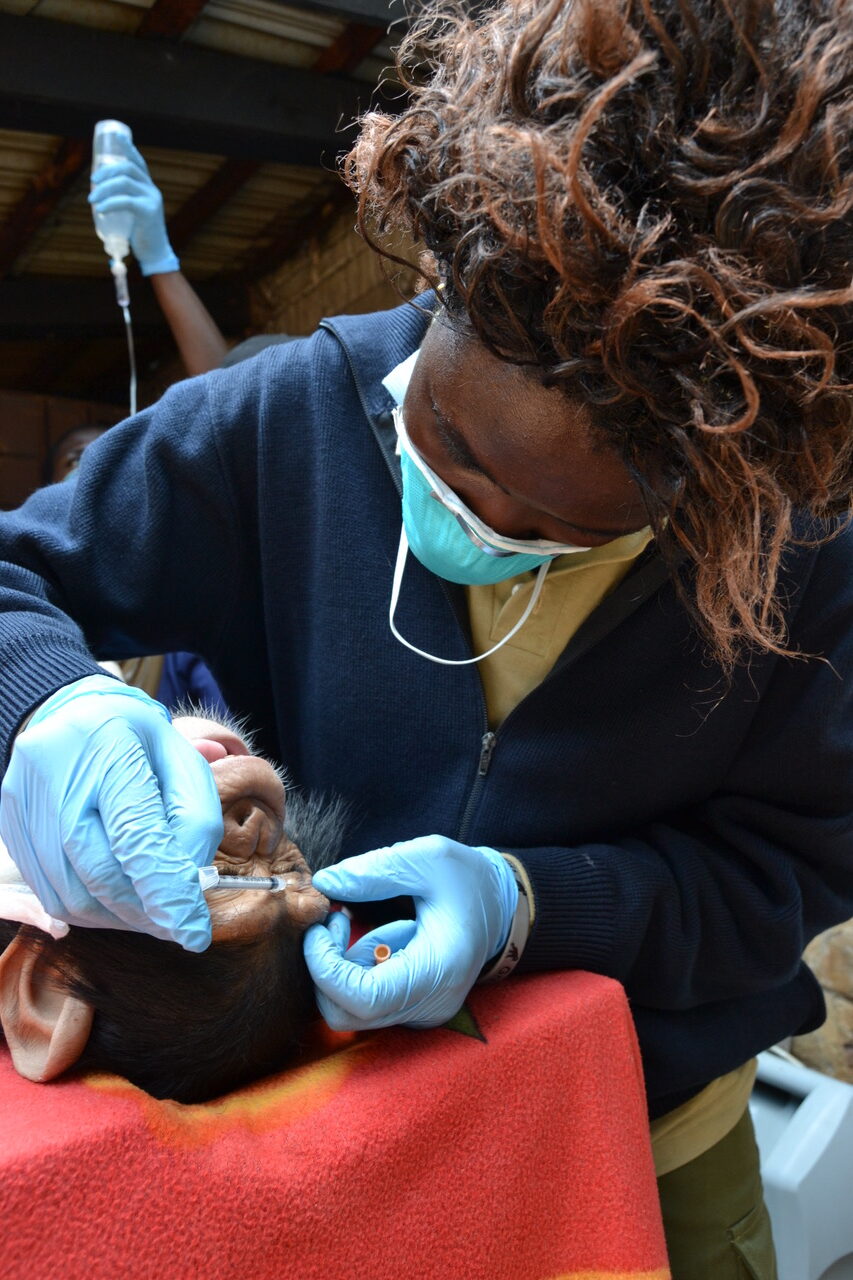 Lina Adolphine Nturubika is a veterinarian at Lwiro Primate Rehabilitation Centre in the Democratic Republic of Congo. 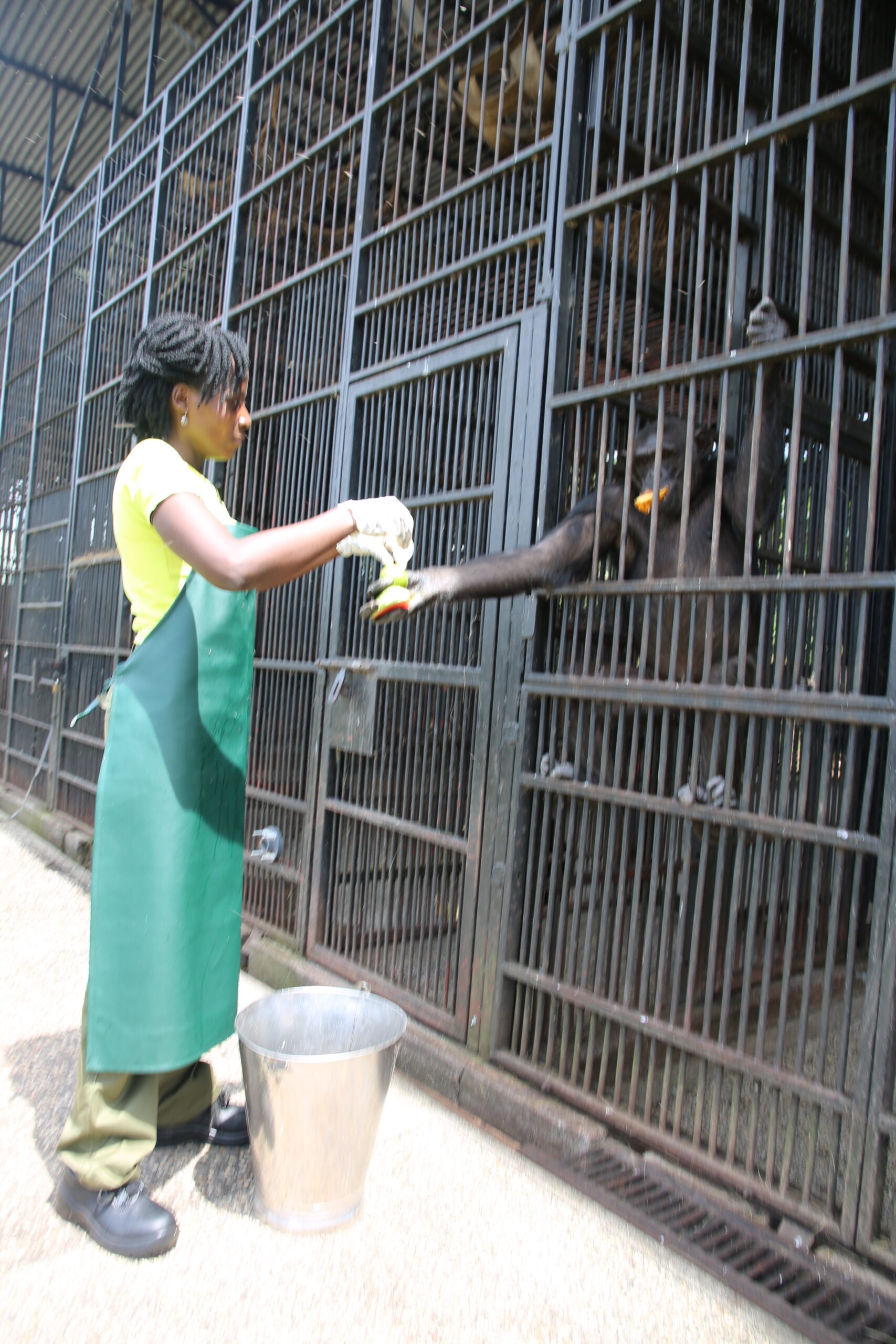 Dorothy Basemera started out at Ngamba Island Chimpanzee Sanctuary as a volunteer. Now she helps make sure that each visitor has a great experince there.