When young vervet monkeys need medical help, the staff at the Vervet Monkey Foundation are always at the ready.

The Christmas Eve rescue began like so many others at the Vervet Monkey Foundation (VMF).

Dave got a call.

Dave Du Toit is the founder of VMF, a PASA member sanctuary in South Africa. And when his cell phone rings, staff thinks a single, collective thought: uh oh.

That’s because a call often means that a young monkey is in big trouble. And there are many ways that can happen.

Sanctuary manager Megan Stark says that during the last year’s baby season, which runs from October through February, “We took in 39 orphaned infants and juveniles. In some cases the mother had been hit by a car and the baby was clinging on the mother’s belly or the babies came in after losing their moms some time ago and they’d been kept as a pet. In other cases, the mothers had been shot by farmers with pellet or other types of guns because they were perceived as pests. We had one orphan who was actually being stoned with her mom at a garbage dump. Her mom didn’t make it, but she came to us with minor injuries.”

Thankfully, the farmer on this call was trying to help. He was bringing in a baby vervet who’d been attacked by a dog.

Torie Curr Smith, a veterinary nurse and the sanctuary’s animal manager, says she took one look at the little monkey wrapped in a towel and knew he was in shock. “His gums were basically white as a piece of paper. “

Assessing injuries in vervets can be challenging to the untrained eye because their skin is naturally blue. But Torie says that this baby’s injuries were all too apparent. “The thigh that had been bitten was huge. It was four or five times the normal size and had a really awkward flop to it, which is never what you want to feel. So all of those signs together were incredibly worrying … a femur break can be lethal to a monkey pretty quickly. “

A rural area on Christmas Eve meant the staff at VMF were on their own. They had to try to stabilize the baby on site. After cleaning and splinting the broken leg, Tori turned to dealing with the infant’s extreme dehydration, which is common in injured orphans. “He had oral and subcutaneous fluids at the same time, which we don’t often do. Basically, for the next few days if he wasn’t eating or drinking, we’d be sticking a syringe in his mouth to try to get him to keep drinking. Those fluids were really important to battle the shock and potential blood loss that we were dealing with.”

Other rescues this past baby season include Dumbo (named for his big ears), a baby hit by the same car that killed his mother as they were crossing a busy road. Since Dumbo suffered a concussion–an all too common injury– Megan says “We kept things really quiet in his area so his brain could heal. For the first couple of days whenever we have a monkey who’s had a concussion or any sort of brain injury, they do tend to sleep a lot. And that was the same with Dumbo. But when he started waking up, he started drinking milk and had this massive appetite. And luckily, with minimal medical intervention, a couple of weeks later he was really a normal little monkey who was bouncing around.”

See Dumbo shortly after his arrival at VMF.

And then there was Pool Boy, a juvenile Torie says, who –you guessed it–fell into a pool. “Vervets are actually quite good swimmers. If they find themselves in the water, they tend to be able to get themselves out of trouble. This poor little guy made the mistake of doing it in the middle of winter. We suspect he went into hypothermic shock and was unable to get himself back out again. “

Physical injuries would be more than enough for these little ones to contend with. But they also experience psychological distress. Megan says, “They spend the first couple days calling out for mom and keeping their distance from the caregivers. They will rarely come straight up to us for cuddles at the very beginning.”

Torie says some babies decide they need to pull out all the stops and give their new caregivers the dreaded Eyebrow. “Basically it’s an aggressive threat display. They’ll lower their body towards the ground and lift the eyebrow ridge at you to make their eyes pop. They’ll often pull back their lips as well and show you their teeth. They’re basically saying back off, look how big I am.”

The move’s intimidation factor is a bit underwhelming. “In a little baby, it’s kind of endearing.”

Infants and juveniles who have recovered but can’t be reintroduced to their troop eventually go to Disneyland, the affectionate term VMF uses for its nursery, where babies take comfort in socializing with other babies. Eventually, everyone is introduced to a vervet foster mother.

That was case for the baby who’d been attacked by a dog. Dubbed Stick, he eventually needed his tail amputated and orthopedic surgery to save his leg. Megan says he healed remarkably well. “He was such a little trooper through all the bandage changes and going to the vet for checkups. He eventually was integrated into one of our on-site troops. If you saw him running around, you wouldn’t have any idea that he went through such a traumatic beginning.”

And as for Pool Boy, he was reunited with his troop just one day after falling into the pool. But a juvenile named Kambi had to wait longer for her family reunion.

She’d been hit by a car and had suffered a severe concussion that initially caused seizures. On top of that, her right arm was dislocated. Despite numerous attempts by a veterinarian to put it back in place, it kept popping out. Megan says, “She started dragging it around and we really were worried about it breaking in the wild and her dying of septic shock.”

So two months after her rescue, the decision was made to amputate the arm, a procedure she seemed to bounce back from almost immediately. Once she’d fully recuperated, Kambi was released back to her troop. Whenever that happens, Megan says, staff can’t help but wonder how the monkey is doing. That was especially true in Kambi’s case.

And then Dave got a call.

“This time, it was a good call from one of the farmers in the area that knows him. And the farmer said, ‘I just saw your baby monkey with one arm jumping around, eating my macadamia nuts with her family.’ So we knew that she was still with her family, she was keeping up.”

After giving Kambi such dedicated and intense care, to know that she was thriving with her family, Megan says, “was like the cherry on top.” 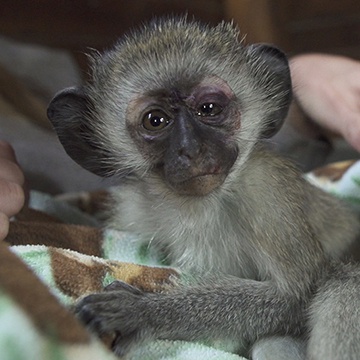 Dumbo had been hit be a car and suffered a concussion. Photo by Kyle Salazar 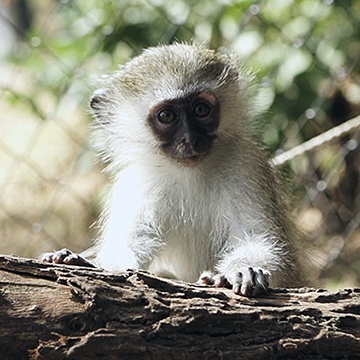 Once Dumbo had recovered, he was placed in an introduction cage so he could meet his new family. Photo by Kyle Salazar 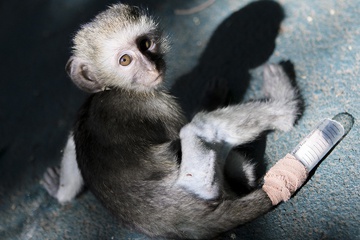 Stick suffered injuries both to his leg and his tail. Photo by Kyle Salazar 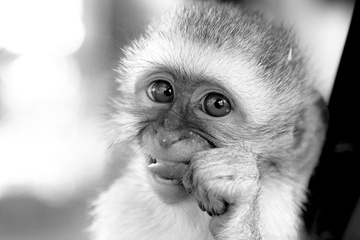 Stick loves mango, so during mango season his cheek pouches are always full of it! Photo by Kyle Salazar

← Why Primates Have Never Belonged in the Entertainment Industry Against All Odds, Fourteen Bonobos Find Their Way Home! →
PASA