Get to know your African monkeys with a in-depth look at the spot-nosed guenon.

After tragically becoming orphaned by the bushmeat trade, Mogwai was found with hunters in the Dja area of Cameroon. Wrapped in a multi-colored blanket, she was brought to PASA member sanctuary, Ape Action Africa, where she arrived dirty, dehydrated, and suffering from a fungal infection. She was much too young to have fully developed any characteristic markings that would indicate her species.

Since receiving exceptional care from the veterinary staff and caregivers at Ape Action Africa, Mogwai’s coloring developed, revealing the tell-tale bright white spot on her precious little nose, the marking that gives her species its name — the spot-nosed guenon (Cercopithecus nictitans).

They live in habitats ranging from woodlands to wetlands but are mainly arboreal, meaning they spend most of their time living in trees. Guenons are unique because they have the greatest variability in striking facial features and hair coloring than any other group of mammals (Glenn & Cords, 2006). Their physical characteristics range from species that appear all brown with no distinct markings to those with white beards, mustaches, and blue goggles. These are just a few of many adornments that describe the different species of guenons.

Mogwai is a greater spot-nosed monkey. They are often referred to as putty-nosed monkeys and known locally as hocheur in Cameroon. Greater spot-nosed monkeys are found in western and central Africa in tropical and dense forests. They are generally very social and live in large family groups that range in size from 12 to 30 individuals. Few studies have been conducted on putty-nosed monkeys’ social behaviors and group life in the wild. However, guenons will mix with other guenon species without interbreeding as a way to form a larger group to deter predators.

These are just a few examples showcasing the remarkable traits that spot-nosed guenons exhibit, yet, there is still much more to learn about these magnificent creatures. PASA member sanctuaries play a critical role in allowing us to learn about the natural behaviors of guenons and the conservation efforts implemented to save this species.

Unfortunately, Mogwai’s story of how she ended up as an orphan is not a unique one. The putty-nosed monkey is listed as a near-threatened species with a decreasing population trend indicating that the species may become vulnerable to endangerment in the near future.  All guenon species are at risk to falling victim to habitat loss, the illegal pet trade, and being poached for bushmeat. Bushmeat refers to wild animals who are hunted for consumption. Guenons are included in this trade, often resulting in mothers being killed while the babies are kept and sold as pets. This was the tragic scenario for Mogwai and her mother.

Illegal wildlife hunting presents a serious threat to guenons and other African primates. An increase in logging and mining operations has resulted in previously inaccessible wildlife habitats becoming easily reached by hunters in trucks. The bushmeat trade has become a major industry, with prices selling higher than chickens and beef, as in some areas, the meat of primates is valued as a delicacy. Bushmeat consumption is no longer confined to Africa and has now become an international issue, with high prices reflecting a demand in cities throughout Asia, South America, Europe, and the United States. The majority of hunting primates for meat has changed from subsistence sustainable hunting to partaking in the worldwide trade. Harvest volumes in Nigeria and Cameroon alone have been estimated at 12,000 tons per year (Fa et al. 2006), and with limited availability of information of the full scale of bushmeat harvest, this estimate might underestimate actual harvest volumes.

PASA works with member sanctuaries and wildlife centers to end bushmeat hunting and give the best possible care to its survivors. PASA’s members do this by investing in communities, employing and working with locals, and running programs in environmental education, anti-poaching patrols, and sustainable livelihoods.

While Mogwai’s young life began with an extremely traumatic experience, she now has a new life in the safety of the sanctuary, thanks to the incredible work of the staff at Ape Action Africa. She bonded with her caretakers and responded well to veterinary treatment, leading her to become a confident and playful little monkey. Her eagerness to make friends resulted in a bond between three young orphaned guenons, Mogwai, Babunga, and Eboko. There is now a group of seven mustached and spot-nosed guenons who have integrated into a new forever family, showing how different species of guenons can live harmoniously together and integrate family groups.

Ape Action Africa has done an incredible job giving Mogwai the help and care she needed to thrive, but their work is never done. PASA’s member sanctuaries are constantly learning about victims of the trade that are in need of rescuing.

Your support can help PASA’s members not only bring these animals to safety but give life-saving care and a chance to be free again. Learn how you can help save lives by visiting: https://pasa.org/help-us-save-lives/. 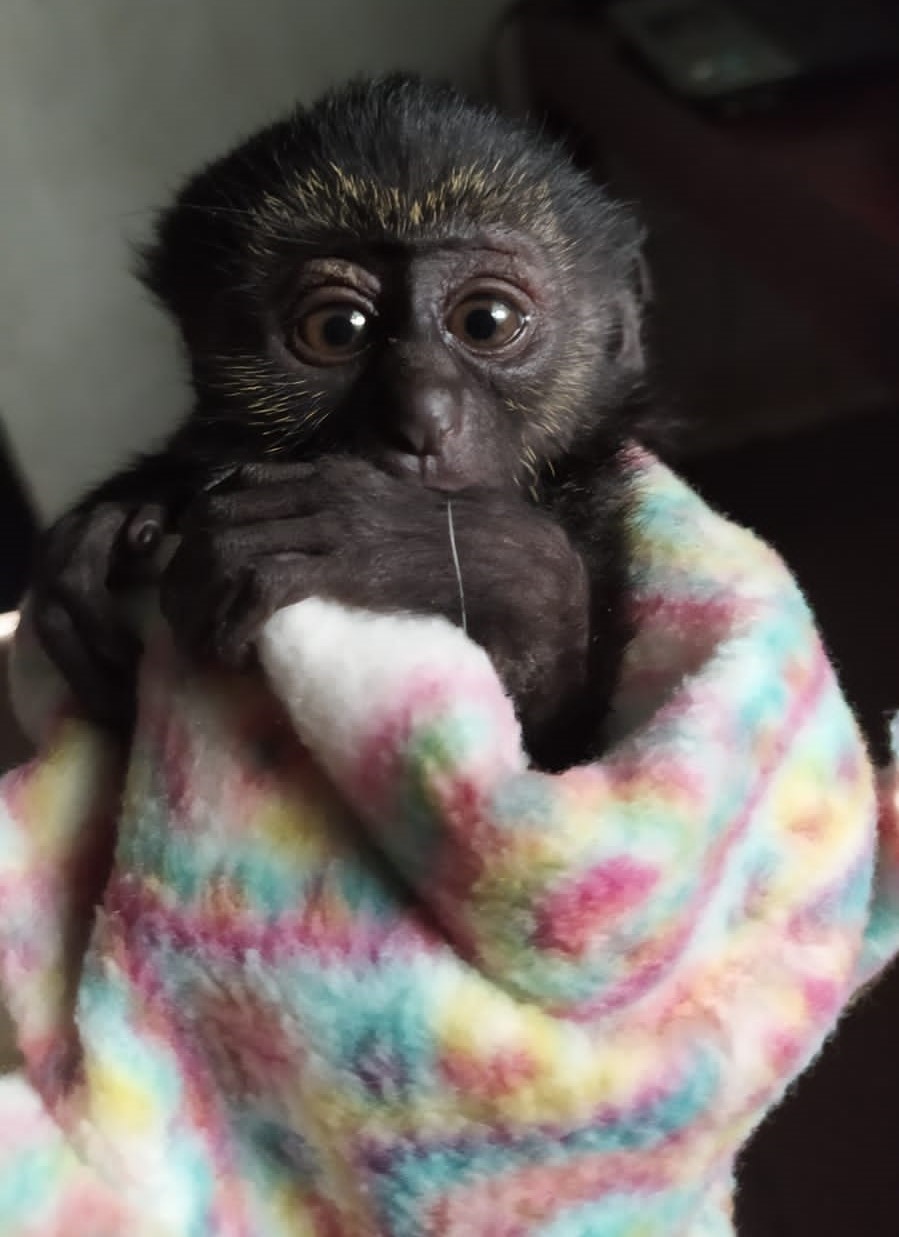 Mogwai was tiny when she arrived at Ape Action Africa, a PASA member in Cameroon. 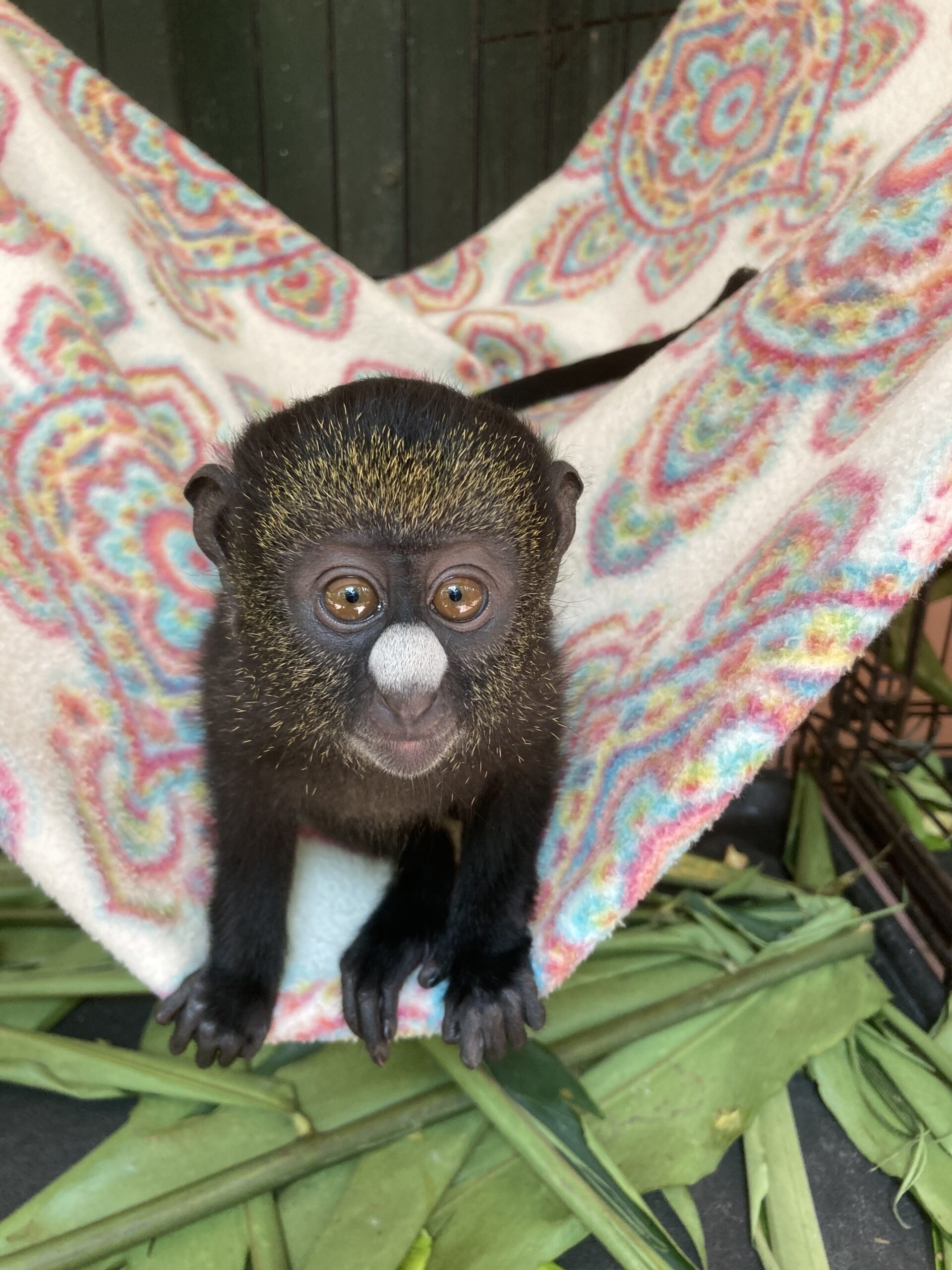 Here’s Mogwai toward the end of her quarantine period, getting ready for her new life. 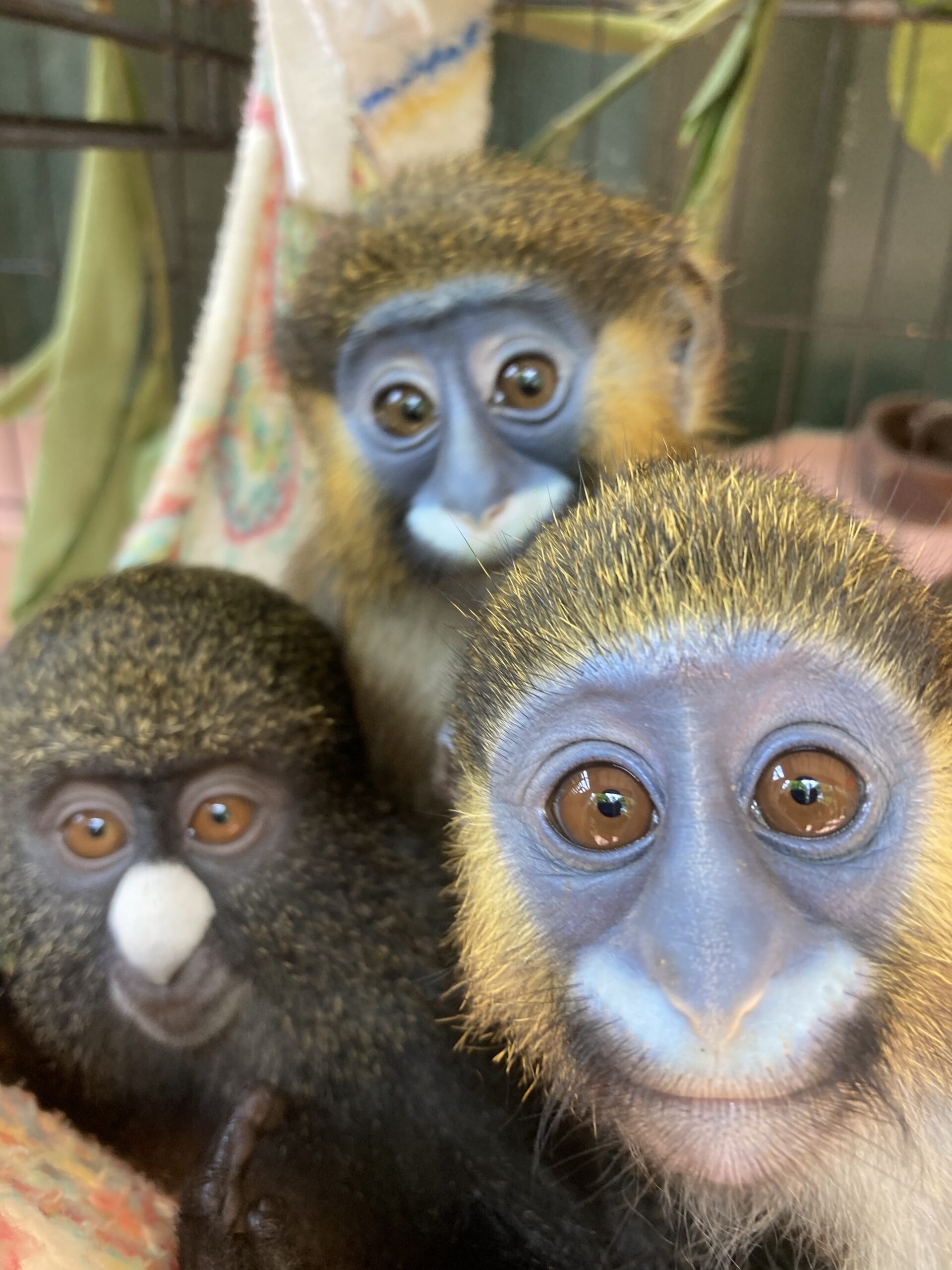