DONATE
Research at PASA Wildlife Centres
Advancing our knowledge of primates in safe and beneficial ways.

PASA member sanctuaries are internationally renowned for rescuing primates, combatting the illegal wildlife trade, and promoting wildlife conservation awareness across Africa. But did you know that they have also played an important role in a number of ground-breaking scientific discoveries about primate behaviour, cognition, and health? PASA members have collaborated with scientists around the world to investigate questions about primates that are difficult to answer in the wild. A recent review by scientists from the Lincoln Park Zoo highlighted the remarkable depth and breadth of research conducted at primate sanctuaries across the world, including at 13 PASA member sanctuaries.

What type of research is undertaken at sanctuaries?
When people hear the word ‘research’ they unfortunately often think of invasive research and laboratory animals. However, the research conducted at PASA sanctuaries, in accordance with PASA’s guidelines, is non-invasive and does not negatively impact the primates. Instead, scientists use methods such as behavioural observations, puzzles or cognitive tasks, or they collect data during routine medical examinations. The sanctuaries have strict rules on what research can be undertaken with them and the welfare of the primates is at the forefront of all research activities. Research spanning a wide range of different topics has been conducted in collaboration with PASA sanctuaries, including studies into social behaviours, learning and cognitive abilities, as well as research into primate health and infectious diseases.

What have we learned from research at PASA sanctuaries?
Scientists have long suspected that some behaviours seen in wild primates are cultural – that is, behaviours that are learned from one another and differ between groups. Working with Ngamba Island Sanctuary in Uganda and Chimfunshi Wildlife Orphanage in Zambia, researchers conducted a range of studies into social learning, cultural behaviours, and tool use with the sanctuaries’ resident chimpanzees. By observing the chimpanzees’ behaviours, and by giving them tasks such as puzzle boxes, scientists found that chimpanzees can learn complex behaviours from one another and even identified behavioural differences between groups living in the sanctuaries.
Researchers at PASA sanctuaries have also made fascinating discoveries regarding collaboration, tolerance, and prosocial behaviours, such as food sharing in apes. Scientists working with Lola ya Bonobo in the Democratic Republic of Congo (DRC) and Ngamba Island demonstrated that the bonobos tended to show higher levels of tolerance and prosociality than chimpanzees. This research helps scientists better understand how different wild ape societies have evolved and the rules that govern them. Researchers have also studied contagious yawning in chimpanzees with Tacugama Chimpanzee Sanctuary in Sierra Leone, helping us to understand how this might relate to empathy in primates.

Important studies into primate health have also been conducted with PASA member sanctuaries. Research into heart disease in chimpanzees has been conducted with Tchimpounga Animal Sanctuary in Republic of Congo, and research into infectious diseases in chimpanzees and bonobos has also been undertaken in collaboration with Lola ya Bonobo and Ngamba Island. This research gives us important information on how diseases may be transmitted between human and ape populations – which is relevant as we navigate the COVID-19 pandemic.

How does this research benefit the primates?
These research findings are fascinating and have helped scientists to learn much about the evolutionary origins of human abilities. More importantly though, these research findings can be hugely beneficial to the primates themselves. A better understanding of the complex minds and emotions of primates can help to gain them better protection under law. Campaigners for conservation, better treatment, and protections of primates have often cited scientific evidence to show the advanced intelligence of these animals. Additionally, by demonstrating to the public the advanced intellectual and emotional lives of other animals, we can convince more people to become advocates for their protection and conservation.

The medical research undertaken at PASA sanctuaries can have important, direct implications for primate welfare. Heart disease is a leading cause of death in captive apes and research undertaken at sanctuaries allows scientists to better understand this problem, with the aim of preventing and treating heart disease in other captive apes. In light of the current pandemic and recent Ebola outbreaks that devastated wild ape populations, it is clear that research into infectious diseases in sanctuary-housed primates is incredibly important in understanding how viruses may pass between human and primate populations.

While much research has currently been put on hold for the safety of the primates at the sanctuaries and the communities surrounding them, future research at PASA sanctuaries will no doubt reveal many more fascinating discoveries about our closest relatives. The more we understand about the minds, behaviours and health of our fellow primates, the better we can provide for their wellbeing in captivity and the better we can protect them in the wild. 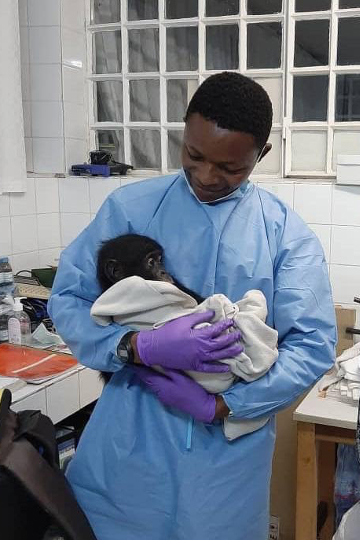 Heart disease is a leading cause of death in captive apes and research undertaken at sanctuaries allows scientists to better understand this problem.