At the end of 2019, primate lovers rejoiced at the results of the mountain gorilla census that spanned their native range of Uganda, Rwanda and the Democratic Republic of Congo. We learned that the mountain gorilla population continues to rise, reaching a record high of 1,063 individuals. Due to this exciting trend, their subspecies was moved from critically endangered, one step away from extinct, to simply endangered. While the species is not out of the woods yet, conservation efforts for the mountain gorilla are clearly getting something right, as this is the only great ape species with population numbers on the rise. However, mountain gorillas are just one of four subspecies of gorilla. And, while we celebrate the good news, unfortunately, the other three subspecies are still considered critically endangered and each faces a slightly different collection of challenges.

Gorillas are the largest primate, with males of some subspecies reaching over 600 pounds. Their calm expression, gentle nature and impressive physique make them captivating and memorable. The dietary habits of gorillas are as diverse as their subspecies. For example, mountain gorillas are found at high altitudes in what is essentially a large leafy green salad bowl, making them folivores or leaf eaters. Other gorillas subspecies enjoy seasonal fruits, while gorillas in the west additionally eat ants and termites, making them omnivores. Some gorillas have a very strict polygamous society, meaning one adult male, multiple adult females and their offspring. However, seeing multi-male mountain gorilla groups is not uncommon. While a lot of variety is seen amongst gorilla types, the biggest factor in determining the threats to a subspecies is the human activity surrounding them. To help clear the confusion, this will be a discussion of the two Eastern gorilla subspecies (mountain gorilla and eastern lowland/Grauer gorilla) and the two Western gorilla subspecies (western lowland gorilla and cross river gorilla). 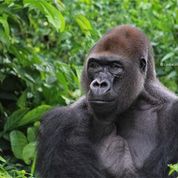 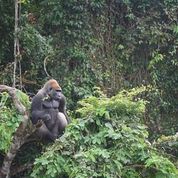 Mountain gorillas are perhaps the most well-known subspecies of gorilla. First studied by primatologist George Schaller, they gained international recognition through Dian Fossey’s 18 years of field work in Rwanda. During this time, she was featured in National Geographic . Her famous book, Gorillas in the Mist, was later made into a movie, further bringing the plight of this incredible animal to light. When her most beloved gorilla, Digit, became another victim to poaching, Dr. Fossey created The Digit Fund (now The Dian Fossey Gorilla Fund International), which continues to this day to raise funds and awareness for the protection of the mountain gorillas. Today, ecotourism has become a key part of protecting mountain gorillas, since visitors give local governments strong financial incentive to protect them. Once almost wiped out from trophy poaching, the presence of armed rangers has effectively stopped this threat. Today, the biggest threats to mountain gorillas are deforestation, diseases, including tubuerculosis, ebola, various skin diseases and more, and political unrest in the Democratic Republic of Congo (DRC). While the deforestation risk is in large part due to expanding human populations and farming, mining for natural resources and the fighting for access to those resources are very huge risks to gorillas in DRC. One of these natural resources in the mineral cobalt, which is found in cell phones and other electronics. You can do your part by not upgrading your cell phone as frequently and also by recycling any used cell phones you are no longer using.

Eastern lowland gorillas, also known as Grauer gorillas, are found only in the DRC. The largest of the subspecies, their particularly stocky builds set them apart from other gorillas. Like the mountain gorillas also living in the DRC, political unrest and mining have greatly taken their toll on eastern lowland gorillas. Deforestation is a second huge threat, with this subspecies only occupying 13% of its historical range. It is estimated the population has decreased by 50% since the mid 1990s, but decades of violence has prevented census work from being completed. Fragmentation of different populations due to loss of habitat also means they are at risk for loss of genetic diversity. Civil unrest also prevents proper ranger protection for this subspecies in much of its current range. A final major threat to eastern lowland gorillas is zoonotic disease. From August 2018 until June 2020, eastern DRC experienced a large ebola outbreak that overlapped with Grauer gorilla habitat. Tuberculosis, a common disease in eastern DRC, is responsible for many human and ape deaths.

On the other side of the continent live the Western lowland gorillas. Estimated to be over 100,000 in the wild, they are still critically endangered because these individuals are spread over a very large range spanning six countries (Cameroon, Central African Republic, Equatorial Guinea, Gabon, Republic of Congo and western DRC). Bushmeat trade is a serious threat to these gorillas, because ape meat is considered a delicacy in some of the countries where they live. Even more tragically, the demand for rare bushmeat from species like gorillas is found across Asia, South America and even major cities such as London, Paris and New York. To sign PASA’s petition to ask U.S. customs to crack down on illegally imported bushmeat, please click here (https://pasa.org/stopbushmeat). Deforestation due to logging is another looming threat. Besides cutting down thousands of acres of forest and natural habitat, logging companies create large roads through previously impenetrable forests, making poaching all the more accessible.

The final gorilla subspecies is the cross river gorilla, which only lives in the hills along the northern border of Cameroon and Nigeria. The rugged terrain makes it challenging for researchers to study this subspecies, but their population is estimated to be only 200-300 individuals. The greatest threat to these gorillas is deforestation. With so few left, habitat fragmentation has resulted in different populations being unable to reach each other, leading to a lack of genetic diversity. There are believed to be 11 family groups living in eight sites. Due to their shy and wary nature, much of what is known about cross river gorillas has been learned indirectly by counting nest sites and analyzing fecal samples found in the forest. The biggest conservation goal for this subspecies is to establish protected forest corridors, which will allow different groups of cross river gorillas to reach each other. Fortunately, thanks to long term educational outreach, it is largely considered taboo by locals to hunt cross river gorillas.

For all gorillas and wildlife in Africa, climate change is a very serious threat. Africa has seen an increase in dramatic forest fires in recent years. As changes in rainfall patterns continue, food will become less abundant for wildlife and humans, which will lead to humans depending on exploiting wildlife even more for survival. Keeping our forests intact and ecosystems in balance is the best way to counter the effects of climate change. 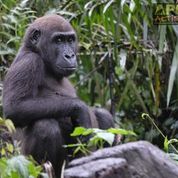 As we are all painfully aware, covid-19 has made 2020 a very unstable and dangerous year. Since gorillas can contract human diseases so easily, it has been important for researchers working with gorillas to temporarily stop observing wild gorillas or implement very strict health guidelines. Ecotourism for gorilla interactions have been halted and anti-poaching ranger presence has been decreased in response to covid-19 as well. This has resulted in an increase in illegal forest activity, which is affecting all subspecies of gorillas in previously mentioned ways. Without the income of ecotourism, it is much more difficult for countries to protect their gorilla populations. Providing financial support to gorilla conservation is the best way right now to help the gorillas survive this unprecedented time.