One of Africa’s most iconic animals, elephants have undergone a devastating surge in poaching in the past decade. In 2009, wildlife surveys and illegal ivory confiscations began to reflect an alarming increase in the number of elephants being brutally poached across the continent. In 2012, ivory prices reached $1,000 per pound on the Chinese market and reports emerged of militant groups in Africa conducting mass elephant slaughters to fund their causes. From 2014-2016, an aerial pan African census showed a 30% drop in population in areas previously surveyed. Conservation groups worldwide began scrambling to get the message out. With China being the leading consumer of ivory, Chinese celebrities like basketball legend Yao Ming, actress and singer Li Bingbing and pianist Lang Lang began lending their names to bring awareness to the crisis.

The combined global efforts have paid off, as China announced on December 31st it will shut down dozens of carving factories and retailers in March 2017, and completely ban the processing and sale of ivory by the end of the year. This will include closing 34 processing factories and 143 trade venues across the country. It also follows closely on the July 2016 ban on ivory importation made by the U.S., listed by conservation organization 96 Elephants as the second biggest ivory market globally.

Responsible for purchasing 70% of global ivory, this move by China should significantly alleviate pressure on Africa’s elephant populations. However, elephants are a slow-reproducing species and some conservationists are still hesitant to get overly excited, as China has also stated the ban will be on “modern ivory” and that authenticated “ivory relics” can continue to be auctioned. A potential problem is that illegally smuggled ivory could be mixed in with antique ivory, if the authentication processes are not monitored closely enough. No matter what, this is a major step in the right direction.

China has a history of being a headliner in the conservation world. Recent wildlife surveys show a 17% increase in the giant panda population in its limited range in the montane regions of Sichuan, Shaanxi and Gansu provinces of China. When China decides to save a species, they’ve shown they can do it well.

However, it is also home to the horrific practice of bear bile farming for traditional medicine, which involves keeping bears in small cages and painfully extracting bile from a hole made in the gall bladder (read about it at Animals Asia’s website). The bears are often dehydrated, malnourished and deformed from growing up in small cages. While the bile has been shown to have medicinal properties, there are now synthetic formulas that are as equally effective, cruelty free and safe for human consumption. Despite a survey conducted in China showing 87% of people disagreeing with the practice, it continues to be completely legal. 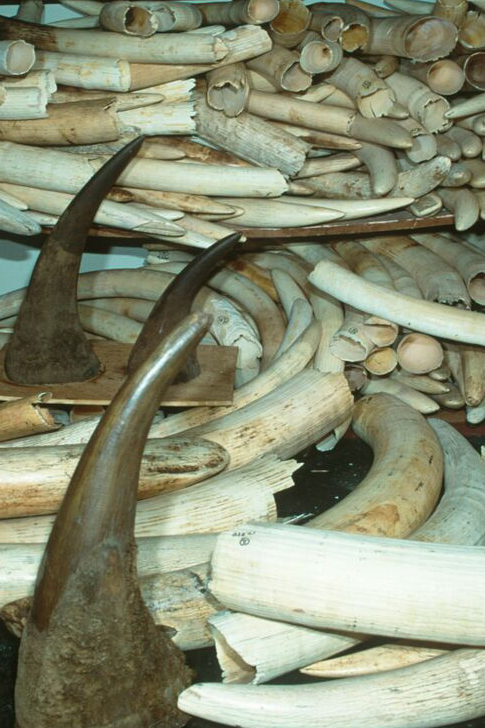 Ivory poaching has devastated Africa’s elephant population in the past decade, with some 70% going to China. Here, some of the poached ivory confiscated by local authorities.

China has come under pressure in the past as well regarding ape conservation. With mining partnerships in many African countries, it is unfortunately quite easy to quietly (and illegally) smuggle infant apes out of Africa and to China, getting $25,000/chimpanzee and $40,000/gorilla. A survey completed in 2013 showed that at least 138 infant chimpanzees had been taken from Guinea to China in the previous two years alone. These infants are sold into the pet trade, the entertainment industry and zoos and wildlife parks.

Studies have shown that portraying apes anthropomorphically, such as by dressing them in human clothes, makes the public more likely to want one as a pet and less likely to realize their endangered status. However, China’s media still frequently portrays infant apes in highly unnatural situations, such as the recently canceled “Wonderful Friends.” This reality show portrayed infant animals including chimpanzees, orangutans, lions and elephants in unnatural and dangerous situations, particularly when integrating species together. Thanks to international backlash, the show will not have a season two.

China is already taking the first steps towards being a leader in conservation efforts, with this move to protect African elephants from extinction. With an estimated 3,000 great apes disappearing from the wild each year due to habitat loss, the illegal wildlife trade and the horrific bushmeat trade, it is important this trend continues before it is too late. When confiscated infant apes are intercepted, they fortunately have places to go, like PASA’s 22 wildlife centers across Africa. However, we can only do it with your help – please help to save the great apes. 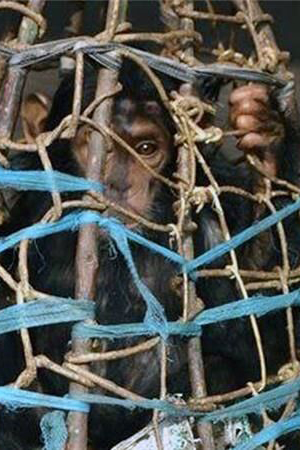 ← Bushmeat Crisis How Can You Reduce Climate Change by Helping Protect Great Apes? →