Ape Action Africa is protecting Cameroon’s great apes through direct action, including rescuing orphaned gorillas, chimpanzees and monkeys, giving them a safe forest sanctuary home where they can live with their own kind.

Deep in the heart of the Cameroon forest, Ape Action Africa is leading the way for wildlife rehabilitation. Founded in 1996, it has become a pillar of primate conservation in Africa and a well-respected PASA member. As the name suggests, this sanctuary saves many orphaned chimpanzees and gorillas, usually after their families have been slaughtered for the bushmeat trade. However, Ape Action Africa additionally takes in many species of local monkeys as they work to protect Cameroon’s remaining wild spaces.

Primates face multiple threats
The primates of Cameroon unfortunately have multiple threats they are up against. Deforestation is taking away their homes at an alarming rate. Additionally, ape meat is considered a delicacy. While illegal, the monetary benefit of selling the meat outweighs the risks for many. Besides causing great damage to wild populations, there are huge health risks to humans who choose to eat the meat of animals that share 99% of our DNA. Unfortunately, this epidemic is spreading as a variety of illegal bushmeat is now making its way to tables throughout the U.S. and Europe. If you haven’t already, please sign PASA’s petition to the U.S. government to crackdown on the illegal importation of endangered species meat.

The forest as classroom
Educational outreach is another main objective of Ape Action Africa. Local school groups that visit the sanctuary are often seeing a gorilla or chimpanzee for the first time. A classroom in the forest of Mefou Park allows children to come connect with nature, developing a desire to protect and save it.

Behind the helm of Ape Action Africa is director Rachel Hogan. After journeying to the sanctuary for a 3-month volunteer stint, Rachel decided to stay in Cameroon after meeting an orphaned gorilla named Nkan Daniel, who made her realize just how serious the conservation crisis was in Cameroon. She has now lived at Ape Action Africa for over 18 years, and currently oversees the rescue of over 300 individuals that represent 15 primate species. In March 2019, she became an Order of the British Empire, a prestigious honor bestowed upon her by Prince Charles for the important work she does to protect wildlife. Rachel recently toured through the United States and Europe, sharing her story and the story of the primates that are alive today because of Ape Action Africa. Her description of how traumatized the orphans are when they first arrive is heartbreaking. Many have significant injuries they received while their families were slaughtered around them. They additionally must cope with, at times, extensive psychological trauma. It is hardest on the older orphans, who are able to remember what happened and now must learn to have the will to live again. Staff at Ape Action Africa first work one-on-one with orphans while their wounds heal but will introduce them to a social group as soon as the orphan is healthy enough.

Protecting primates in the wild
Rachel is adamant that Ape Action Africa’s biggest responsibility is to protect the wild populations of primates. While what the sanctuary has accomplished is truly jaw-dropping, they cannot conquer this mountain alone. From helping to spread the word to volunteering onsite in Cameroon, Ape Action Africa recently posted this message on Facebook listing the ways you can help them in 2019! 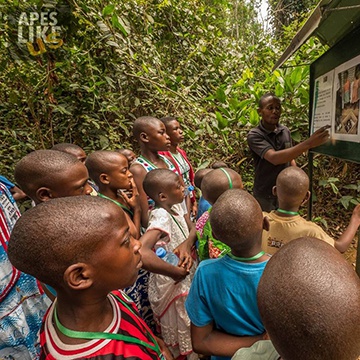 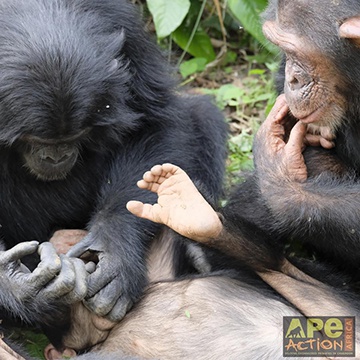 Rescued orphans are put into social groups where they can display natural baheviors like grooming. Photo Credit: Jo Gaweda

← Volunteer Spotlight: Meet Natasha Caring for the Most Vulnerable →
PASA