Monkeys vs Apes: How are They Different?

PASA members care for both monkeys and apes. Let’s break down some of the key differences between them.

Monkeys vs apes — these two types of primates are similar but have key differences. Monkeys and apes both belong to the taxonomic order Primates, but they fall into two distinct subcategories.

PASA member sanctuaries rescue and care for both monkeys and apes. Although all primates have similarities, monkeys and apes are different. To help you understand, here are three main areas to consider: appearance, geography, and intelligence. 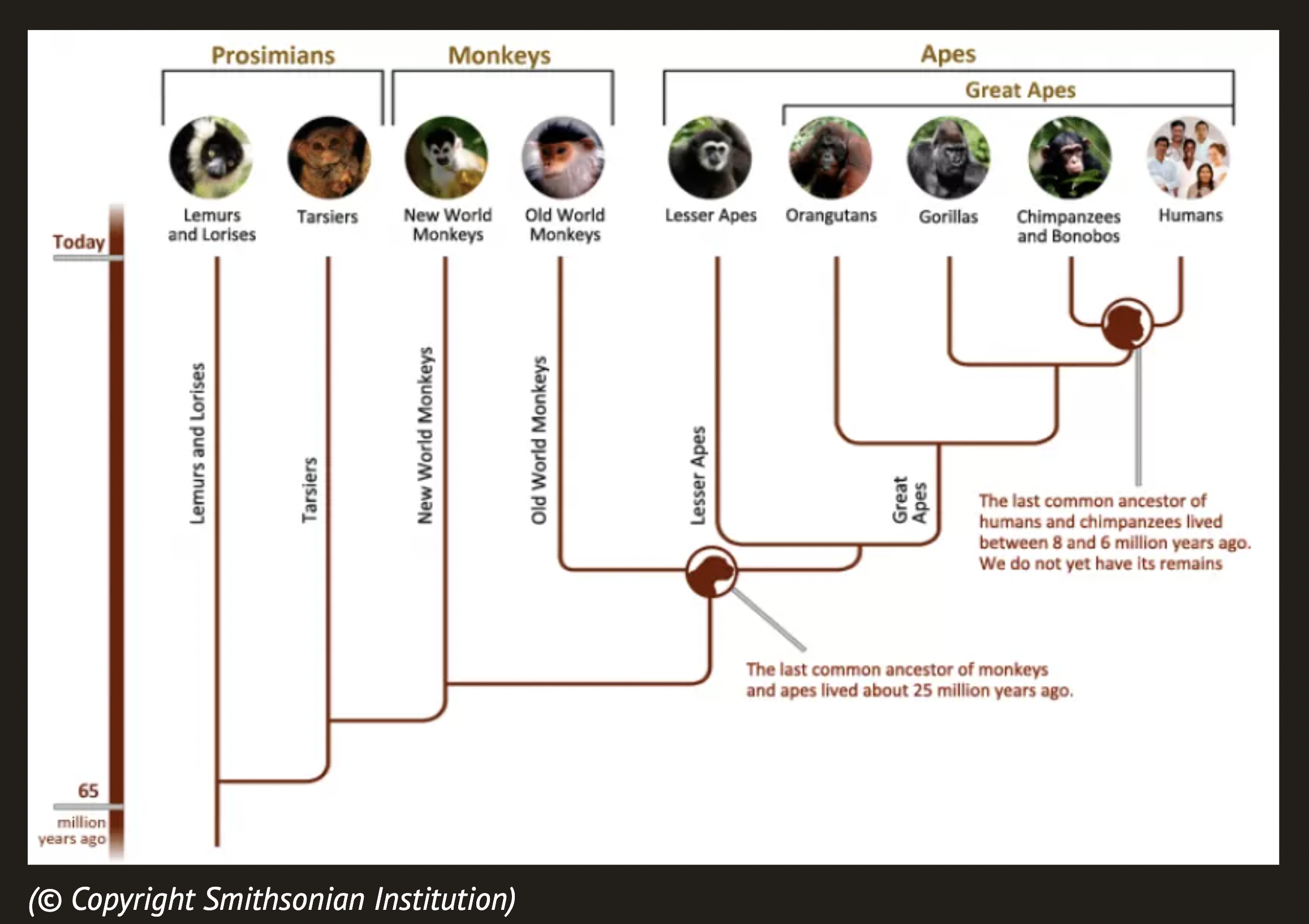 How do monkeys and apes differ in appearance?

The easiest way to distinguish between a monkey or an ape is to see if it has a tail. Almost all monkeys have tails, while apes do not. Also take note of the primate’s body shape, size, and other physical attributes. Apes are generally larger with wider chests and almost naked faces. Monkeys are smaller with more narrow chests and they have hair on their face.

Movement can be another helpful indicator. Monkeys generally move by clinging and leaping on branches or walking on all fours (quadrupedalism). Monkeys with prehensile tails (tails that can grasp and hold) use their tails to hold onto branches while moving through the trees, while monkeys with non-prehensile tails use them for balance and weight distribution. Apes also walk on all fours but also notably walk on two feet (bipedalism) and use arm swinging (brachiation) to get from place to place. 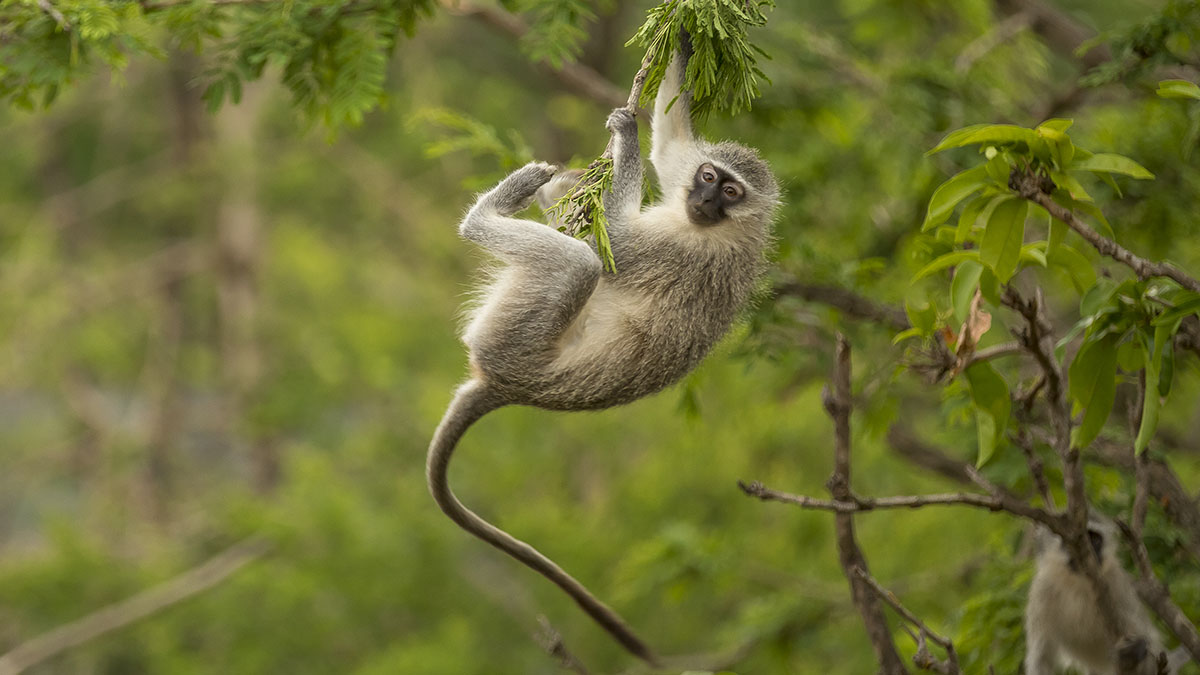 Monkeys are usually small, hairy primates that rely on their tails for balance and movement. Photo shows a vervet monkey swinging from a tree branch. ©Vervet Monkey Foundation. 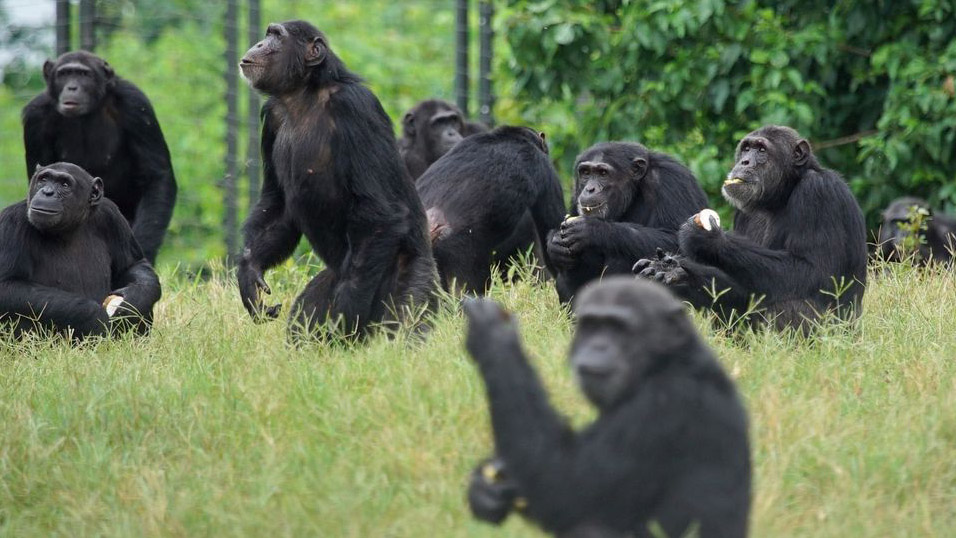 Apes are larger primates that have wider chests and almost naked faces. They lack tails and are able to walk on two legs. Photo shows a group chimpanzees feeding . ©Ngamba Island Chimpanzee Sanctuary.

Where do monkeys and apes live?

Three species of great ape live in Africa: chimpanzees, gorillas, and bonobos. The fourth species of great apes, orangutans, are only found in Southeast Asia. Lesser apes, like gibbons and siamangs, live in both Africa and Asia. These species are called lesser simply because of their size. Monkeys are a bit more spread out, named aptly by where they live— old world monkeys live in Africa and Asia, while new world monkeys live from Mexico on down through South America.

How do monkeys and apes differ in intelligence & behavior?

Primates are generally thought of as highly social and intelligent animals. Both monkeys and apes have the extraordinary ability of cognitive mapping, enabling them to remember where various food, danger, and landmarks might be in their home range. Both also use sounds and body language to communicate with each other.

Apes, however, have a much larger brain-to-body-size ratio than monkeys. Ongoing research studies have shown that some apes are capable of higher levels of cognition and communication than monkeys. Apes can problem solve and create and use simple tools, as Jane Goodall saw chimpanzees do for the first time in Gombe in 1960.

Another interesting difference between these two groups is their bedtime routine. While monkeys will rest on branches, apes make a nest each night. They gather brush, browse, and foliage to fashion a comfortable place to get some shut eye.

And there you have it, a crash course in the differences between monkeys and apes. With your support, PASA members care for over 3,000 primates. They rescue and rehabilitate all types of African primates, including chimpanzees, gorillas, mandrills, gibbons, as well as dozens of monkey species. Many species they care for are endangered. Without the critical work of the Alliance, these intriguing species could be lost forever. To protect apes and monkeys in Africa, consider becoming a Primate Protector today.