Caring for the Most Vulnerable

The Vervet Monkey Foundation has rescued a number of blind monkeys, some of whom lost their sight at the hands of humans. Sanctuary staff work hard to keep these special-needs primates safe and provide them with companionship.

The call that came in a few weeks ago to the Vervet Monkey Foundation started off with a report of a baby monkey alone, a sure sign that something had gone terribly wrong.

A little female had been found wandering in a sports stadium about an hour from the sanctuary.

Leelo was terrified, dirty, riddled with ticks, and to top it off, blind.

After an initial exam, sanctuary manager Megan Stark says, “We tried to make her as comfortable as possible because the experience (of coming to the sanctuary) is basically like an alien abduction. So our biggest thing is to try to take that fear away. “

Tasty treats, a hot water bottle to cuddle up next to, and a quiet environment all help to do that. So does telling new arrivals in their native tongue that you mean no harm. And that involves lots of lip smacking. “It’s one of the few ways that we can communicate good intentions and that we’re trying to be nonthreatening. It’s a very comforting thing.”

As for Leelo’s past, Megan says, “We’re not exactly sure what happened to her. We suspect maybe she was dropped from the troupe because of her (lack of) eyesight.”

Because she has no signs of injuries or trauma, Leelo’s blindness seems to be congenital. As sad as that might be, it’s sadder still when a monkey has been blinded by a human.

That’s the case, Megan says, for the three adult blind monkeys at the sanctuary who all arrived suffering from wounds from pellet guns. “People use them as a deterrent when monkeys are coming into their homes or on their farms. There seems to be this perception that pellet guns are a more humane deterrent (compared to actual guns) but that’s completely not the case. The sad reality with pellet guns is that it often leaves them with systemic infections. It doesn’t kill them straightaway. And in the case of these three blind monkeys, pellets were knocking around their skulls and damaged their optic nerves beyond repair.”

Megan adds that if it truly becomes necessary to deter a monkey, there are the kinder alternatives.

Like all monkeys who must live out their lives at the sanctuary, blind animals are integrated into a troop of their own. Theirs is located in two adjoining cages and led by a self-appointed matriarch named Shasta, a middle-aged female who’s perfectly sighted and excels in welcoming newcomers. “They’re also in with another female about four and a half years old named Cuddy who suffered significant brain damage in a road traffic road accident as a baby. So it’s an eclectic, mixed little group. “

Likes all introductions, these are slow and careful, beginning when the new kid on the block is placed in a wire cage next to the enclosure. This is so troop members can touch–but not bite or grab–the newcomer.

Bell, another blind baby taken in by the sanctuary this year (her blindness is most likely due to a neurological issue) was recently introduced into the troop this way.

After a number of meet & greets, she was released into the enclosure. It’s a moment, Megan says, that can be a bit nerve wracking. “But you just have to trust the process. Shasta showed a lot of interest in Bell (by sniffing, touching, and grooming her). The two are now inseparable. Shasta carries her on her belly. She’s constantly grooming her. She even lets her eat first which, for a monkey, that’s pretty good!”

Bell gets her name from the fact that she was taught to associate the ringing of a bell with her milk bottle. “So even today, multiple times a day, our volunteers will ring the bell from the outside the enclosure, and it might take her a minute, but she’ll come running right up to drink her milk.”

The Blinds, as this little troop is known, will soon benefit from the willingness of Megan and former animal manager Torie Smith to put themselves on public display.

To raise funds for a bigger enclosure for the Blinds, Megan and Torie spent 24 hours locked inside an introduction enclosure. “We ate the same foods as the monkeys would’ve gotten, we slept on the ground, and the only time we were allowed out was for bathroom breaks because we weren’t willing to go with that. “

Megan says the troop next to the enclosure seemed puzzled about the slumber party happening adjacent to their forested enclosure. “I think they were probably pretty confused at what we’re doing and a little bit jealous at all of our treats. We got some eyebrows.” In the vervet world, raising eyebrows is a threat display. One can assume its use here attests to the outrage with which the treat disparity was viewed.

Braving those raised eyebrows paid off.

The fundraiser was a success and the new enclosure now being built will feature many enrichment items, including stable perches and a dirt floor–a selling point in monkey real estate. “They’re currently on concrete. So that’ll be a nice kind of enrichment for them. (A dirt floor) gets back to what they would have known and grown up with. They’ll have some sturdy trees to climb as well.”

Like the current one, the new enclosure will be adjacent to a sighted troop the blind monkeys know well. Megan says, “They spend hours grooming each other and playing through the fence. So it’s important for us that we don’t shift them away from the monkeys that they know and recognize.”
Staff have recently started to introduce Leelo, the blind infant found wandering in a sports stadium, to her eventual troop. When Leelo was placed near that enclosure, Cuddy, the sub-adult with brain damage, seemed thrilled. “She was running around in circles she was so excited to see this little lady.”

That bodes well for Leelo’s integration into the troop and for a life that, despite her blindness, will be filled with care and friendship. 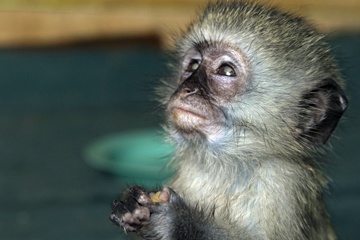 Bell’s blindness is most likely due to a neurological issue. Photo by Kyle Salazar. 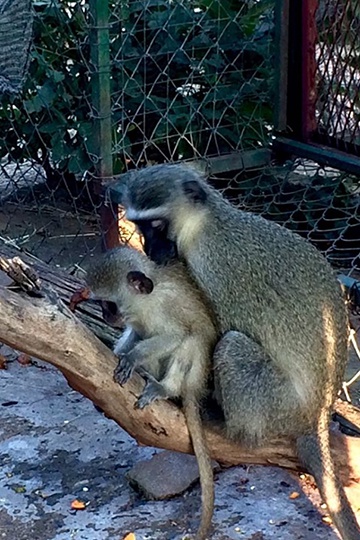 Shasta and Bell are inseperable. 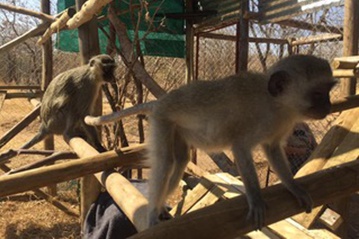