Bringing Out the Wild

How enrichment helps PASA’s primates maintain their natural behaviors despite their traumatic pasts.

Caroline Griffis does not travel light.

On business trips, she manages to stuff stainless steel mirrors, PVC pipes, and extra large Kongs into her suitcases.

For a primate behaviorist, that’s called packing the essentials.

For the last six years, Caroline has been helping PASA member sanctuaries across Africa troubleshoot behavior issues and provide the animals in their care with appropriate enrichment. Her latest trip was funded through PASA’s Primate Care Training Program, an effort that seeks to produce long-term improvements in the welfare of the great apes and monkeys at PASA’s wildlife centers.

While on the surface enrichment activities might appear to be simply fun for the primates, they’re designed to elicit natural behaviors that the animals would display in the wild. As Caroline puts it, “A lot of enrichment is focused on encouraging foraging behavior because primates spend so much of their time searching for and consuming food.”

Enrichment can play a critical role in helping primates recover from traumatic pasts, something that most of the animals in the care of PASA member sanctuaries have endured, whether they’ve been rescued –sometimes near death – as young animals¬ orphaned by bushmeat hunters, saved from years of desolation while being kept as illegal pets, or nursed back to health after suffering severe, life changing injuries. 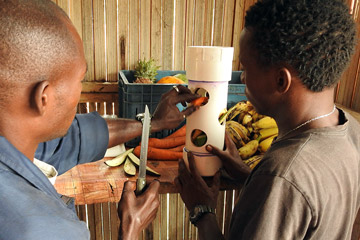 Now back to those PVC pipes. Before visiting PASA sanctuaries, Caroline stocks up on them at the hardware store. And then, in an activity that would make Martha Stewart proud, she cuts and drills the pipes to make sturdy puzzle feeders that can attach to enclosures. “Long, slender pipes can be filled with honey or peanut butter, and this brings out termite fishing behavior seen in wild chimps. Other larger pipes with holes drilled into the sides, and filled with popcorn or produce, are given to monkeys as well as apes. These feeders require problem-solving skills. I love watching the primates using these devices for the first time. They are clever and can be quite creative in their approach.”

But for one group of chimps living at Ape Action Africa in Cameroon, the enrichment does not come in the fishing, but in the breaking. “The chimps discovered it was easier to break the devices to get to the food. They surprise me at times. I’ve given these feeders to gorillas and not had them break!”

Mirrors can also be used for enrichment. Chimps, who recognize their own reflections, find them entertaining. “I’ve even seen them use the mirrors to spy on neighboring chimps that are not in their line of sight.”

Other enrichment items in Caroline’s suitcase include solid plastic balls, Kongs, blankets, and dried cranberries that she uses in positive reinforcement training. “Desensitization and positive reinforcement can be used to reduce anxiety or abnormal behaviors that may have developed prior to their rescue, as well as reduce stress that might be brought on by routine activities at the sanctuary. Training sessions can also serve as enrichment.”

But first and foremost, Caroline says, enrichment should take the form of social companionship. “And always, the preferred option would be animals of the same species. But if that’s not possible because a primate is in quarantine or waiting to be integrated into a social group, that’s where humans can fill the role of social companion.”

That’s the case with Essogoue, a western lowland gorilla that Caroline worked with at the Fernan-Vaz Gorilla Project in Gabon. Essogoue was originally housed with two other gorillas who’ve since passed away.  The silverback, who’d been used in medical research before coming to Fernan-Vaz, was frequently agitated. Unfortunately, integrating Essogoue into a social group was not an option, nor was he a candidate for release into the wild. So the sanctuary director asked for Caroline’s help. She taught the staff how to interact with Essogoue so that he was busier throughout the day and showed them how to provide feeding enrichment in a manner that would elicit natural gorilla behaviors. Caroline says,“The staff witnessed a significant transformation in Essogoue’s behavior. The senior caregiver told me he’d noticed how calm and happy he’d become.”

Caroline will soon be returning to Fernan-Vaz to work with Essogoue again. She says that helping individual animals also helps that animal’s caregivers. “They benefit when their primates are happier and perhaps then become easier and safer to work with. It’s a joy to be able to work with the staff and teach them how to better care for these amazing animals.”

In other words, Caroline adds, for the staff who care for them, watching primates being happy and healthy is a form of human enrichment! 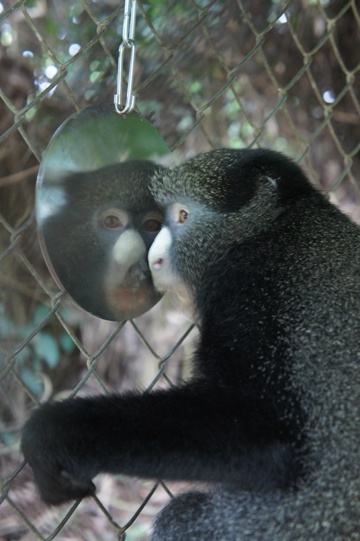 Steel mirrors serve as environmental enrichment for primates in sanctuaries. 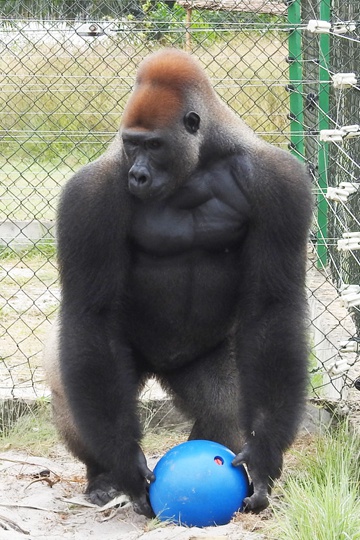