PASA has 23 member sanctuaries across 13 countries in Africa, each playing a crucial role in protecting local wildlife. First and foremost for all members is helping orphaned and injured primates. Sometimes animals in need are brought to the doorstep of a sanctuary by a good samaritan and the process is straightforward. More often than not, it is not so simple. Complications arise from the illegal activity surrounding the black market wildlife trade and by sanctuaries themselves following international and national laws, especially when the rescues are endangered species.

Beyond the logistics, the physical and mental health of each individual rescue plays a key role in the difficulty level. Sometimes the monkeys and apes have been given enough basic care that they are stable enough to be moved to a more appropriate life in a sanctuary, while other times the individual has been so deeply mistreated that survival is uncertain and time is of the essence. Orphans who have just been torn from their slaughtered families likely have fear of their human rescuers, while others who have been kept in solitary situations for years may be grateful for any social interaction. Experienced PASA member sanctuary staff know to be patient and empathetic for each situation.

To find out more about the rescues of PASA’s sanctuaries, I reached out to Kaitlyn Bock, PASA’s Africa Operations Manager, with a few questions.

NT: What logistics need to be considered when transferring a primate to a sanctuary? Which steps usually provide the biggest challenge?

KB: It depends on whether a rescue is in a country where there is a PASA member sanctuary, or if it is happening in a country without a sanctuary. Rescues within a single country are often more straight-forward than a rescue that crosses national borders. For an in-country rescue, the sanctuaries will make the arrangements themselves and work in close collaboration with local government officials. They work with law enforcement to help confiscate and provide housing for animals that are being trafficked. Rescues across more than one country can be a bit more complicated and take around 1-3 years to complete. The determining factor is often whether the current owner of the animal is willing to let them go to a sanctuary. After that, we work to find a home at a PASA member wildlife center. To organize an international transfer, you need lots of paperwork! The African primates have protections under CITES, which means you need official documents and government approval to move an animal from one country to another. Transporting a primate across borders requires health and wellness checks, blood work, paperwork to test the blood, and CITES import and export permits. PASA works with our member sanctuaries, government officials and our network of conservationists and wildlife advocates to help organize an animal rescue across borders.

NT: What is the most memorable rescue you have been a part of?

KB: PASA worked with the Jane Goodall Institute, IFAW, the Angolan government, and our member sanctuary Tchimpounga to organize the rescue of Joana and Rikita, two adult chimpanzees that had been kept in small cages in Angola for many years (https://pasa.org/joanna-and-rikita/). Now, they live with a group of other chimps at Tchimpounga Sanctuary in the Congo. They can climb trees, make friends, and eat lots of nourishing food. Their rescue was the result of a terrific collaboration between our organizations and several dedicated people on-the-ground. We all worked together to find a solution for these two chimps.

NT: Sometimes rescued animals are in need of immediate critical veterinary care- what are common treatments that vets at PASA member sanctuaries need to do for these particular cases?

KB: It varies case by case. Often the individuals are dehydrated and in immediate need of food and water. Many also have injuries from their capture and detainment. This can be wounds from a machete, broken arms from being pulled too roughly, or cuts from the ropes that hold them. Sanctuary vets will work to treat these injuries as quickly as possible. If a rescued animal is a baby that was recently pulled from its mother, veterinary staff can act as surrogate mothers to keep the baby fed with milk and under constant supervision until they are bigger and stronger.

NT: Preventing primates from being taken from the wild is the most effective way to save them. What is PASA doing to prevent poaching?

KB: PASA works to prevent poaching in a number of ways. Nearly three-quarters of PASA member organizations conduct anti-poaching patrols in critical primate habitats. PASA members also use education programs to inform people about the true impact of hunting wildlife and run community development projects to provide alternative livelihoods for people who live near primate habitat. Every year, nearly 500,000 people are educated about the importance of wildlife and the environment.

NT: What can PASA fans do who want to help with future primate rescues?

KB: Rescues can be long and expensive endeavors. Once an animal is finally brought to a center, they will need veterinary care to stabilize them and ongoing care for food, housing, and nutrition. Many of these animals will live for decades at a sanctuary. Supporting PASA and our members through monthly donations is the best way to get involved from abroad. Additionally, signing our petition (https://pasa.org/petition-to-end-social-media-support/) and sharing our stories with friends and family to spread the word makes a huge difference in our fight against the wildlife trade. 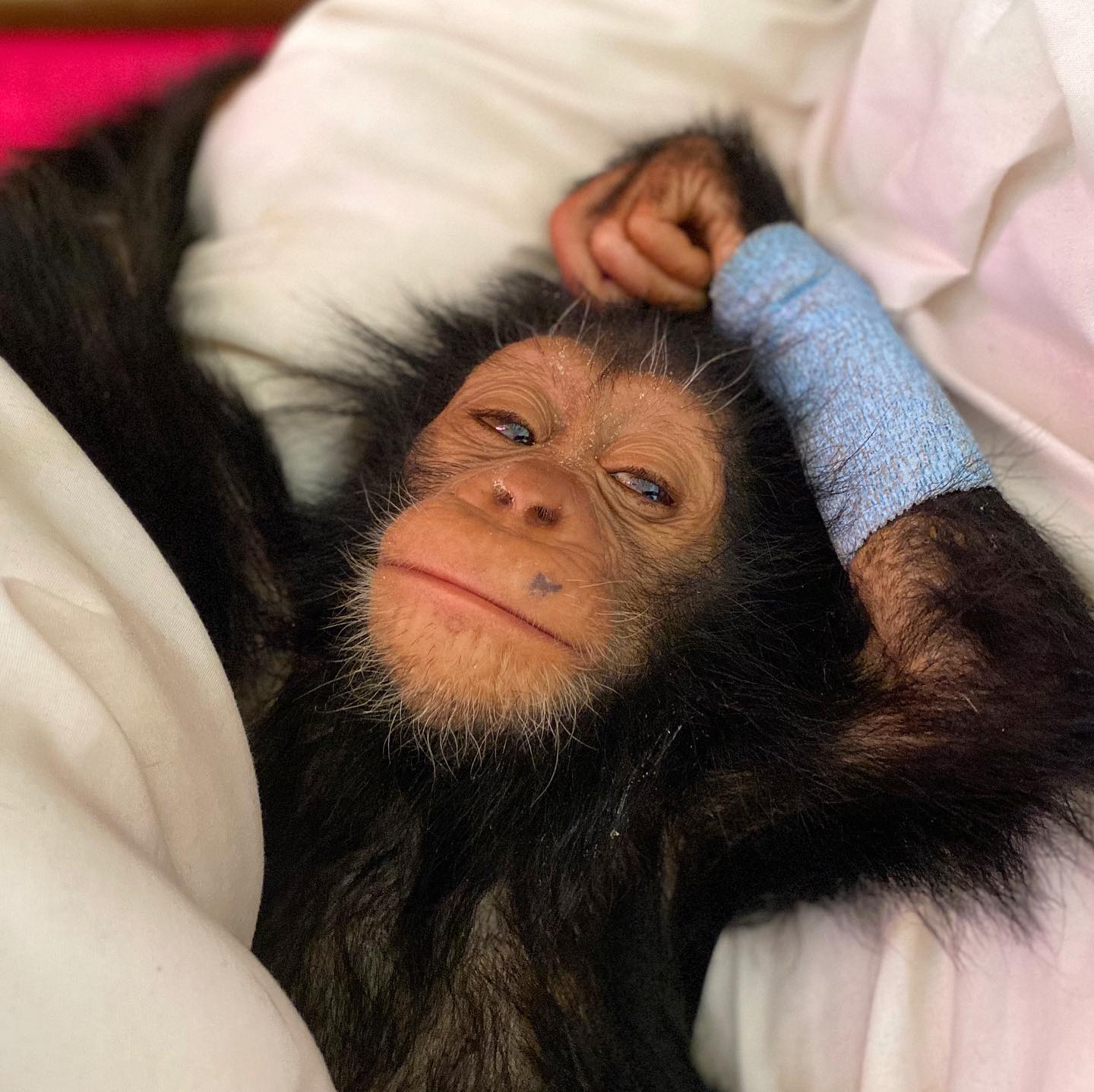 Ujasiri, a baby chimp, was brought to Lwiro Primate Rehabilitation Center, in D.R. Congo, after being rescued from a conflict zone. 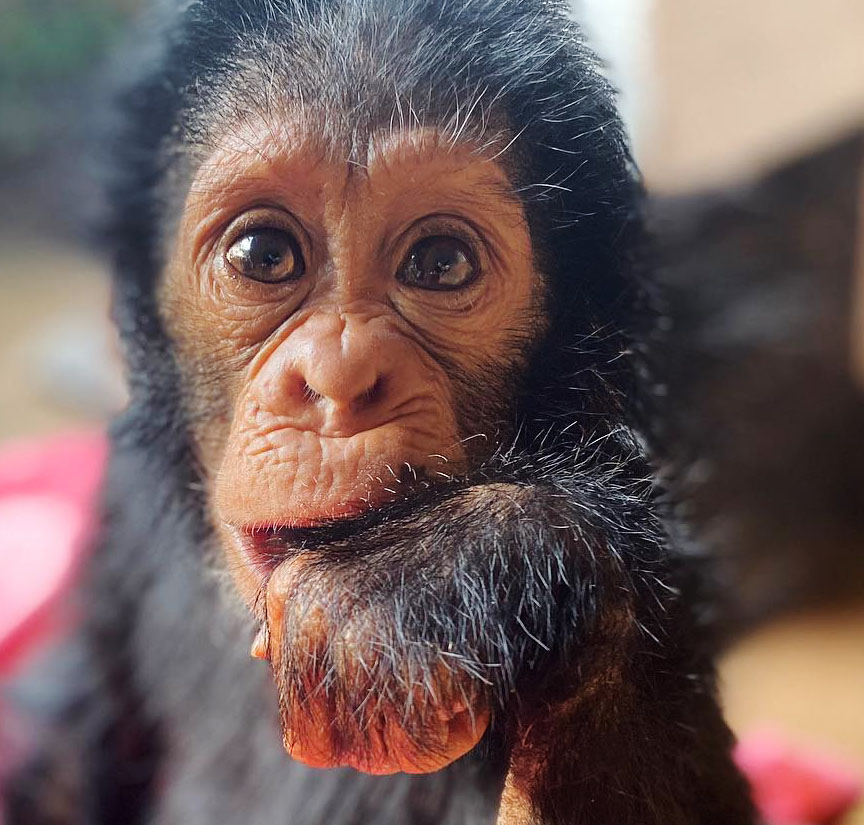 Now Ujasiri is getting the care he needs to grow and thrive.

← Ensuring Great Care After the Rescue Cryptocurrency and Conservation: A New Approach →
PASA