A Reflection on Claudine Andre, a Hero for Bonobos – Part II

In 2002, she opened “Paradise of the Bonobos,” just outside Kinshasa.

In 2002, Claudine officially opened Lola ya Bonobo, “Paradise of the Bonobos,” just outside Kinshasa in a location that had previously been a hotel. Nurseries and expansive enclosures were created, what was previously a swimming pool was turned into a water filtration system, and the rescued bonobos finally had a secure place to call home. As the facility has grown, more jobs have become available to Congolese locals including positions in caretaking, commissary, maintenance, gardening and security. Lola ya Bonobo additionally has plans to develop two more enclosures on their 75 acres of land. 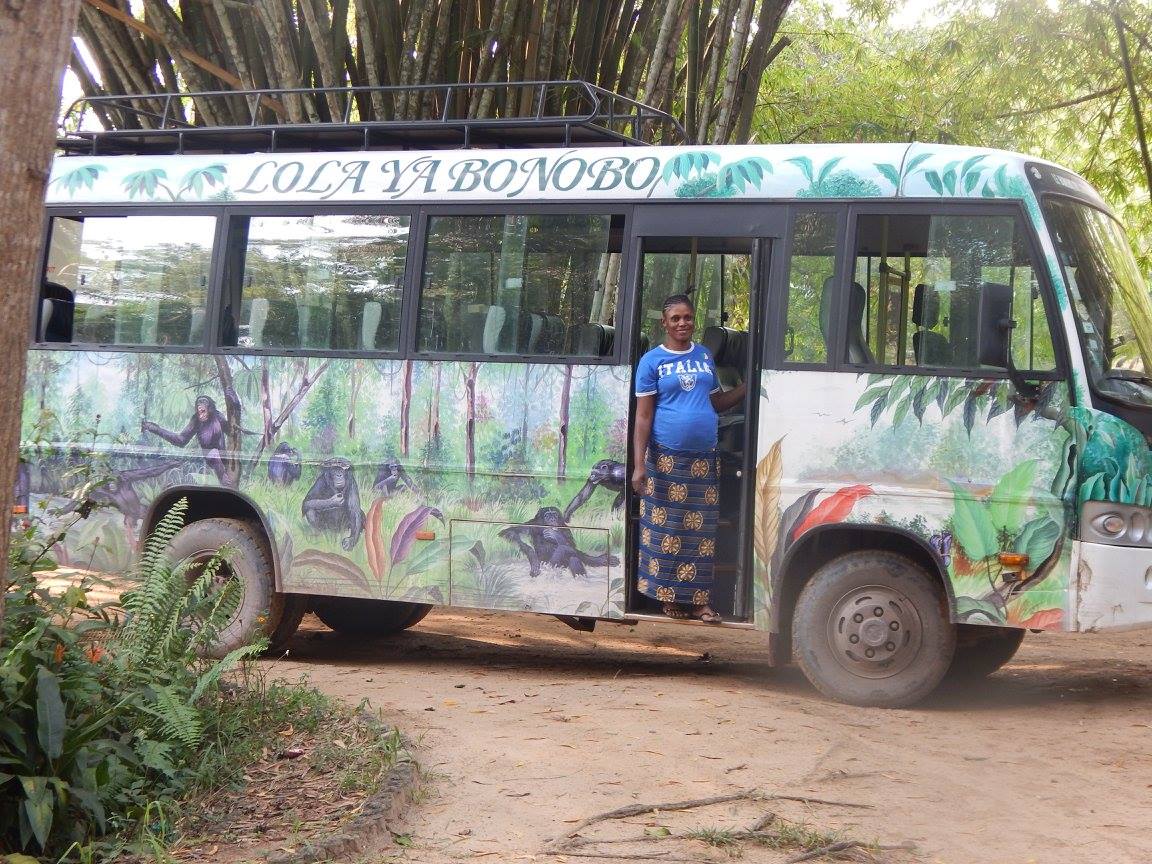 A bus Claudine purchased with her prize money to help the staff get to work. (Photo by Natasha Tworoski.)
To this day, the psychological welfare of orphaned bonobos that are brought to Lola ya Bonobo is considered one of the highest priorities in saving their lives. The bonobo infants that arrive at the sanctuary are typically malnourished, infested with parasites, may have sustained injuries from when their mother was killed. Often, they’ve contracted respiratory illness from being passed between multiple humans during the illegal trading process. All of these problems are important to address quickly, but without comforting the infants and providing them some sense of security, they will give up the will to live and medical treatments will be in vain. Claudine Andre’s compassion and insight is the reason we know this, and why Lola ya Bonobo became the success story it is today.

Like other apes, bonobos have long lifespans and can easily live into their 40’s in captivity. This longevity is a huge commitment for a facility to take on. Since Lola ya Bonobo is the only sanctuary available for orphaned bonobos, Claudine quickly realized she needed to do something to alleviate the pressure placed on the sanctuary. With this in mind, she formed Ekolo ya Bonobo to return some of the rescued bonobos back to the wild. Careful to select individuals that were not too dependent on human interaction, nine bonobos were chosen and in 2009, they were released at Ekolo. These introduced bonobos are still monitored today to ensure their safety. Since their release, three infants have been born into this now-wild group of bonobos, helping to ensure the species continues. 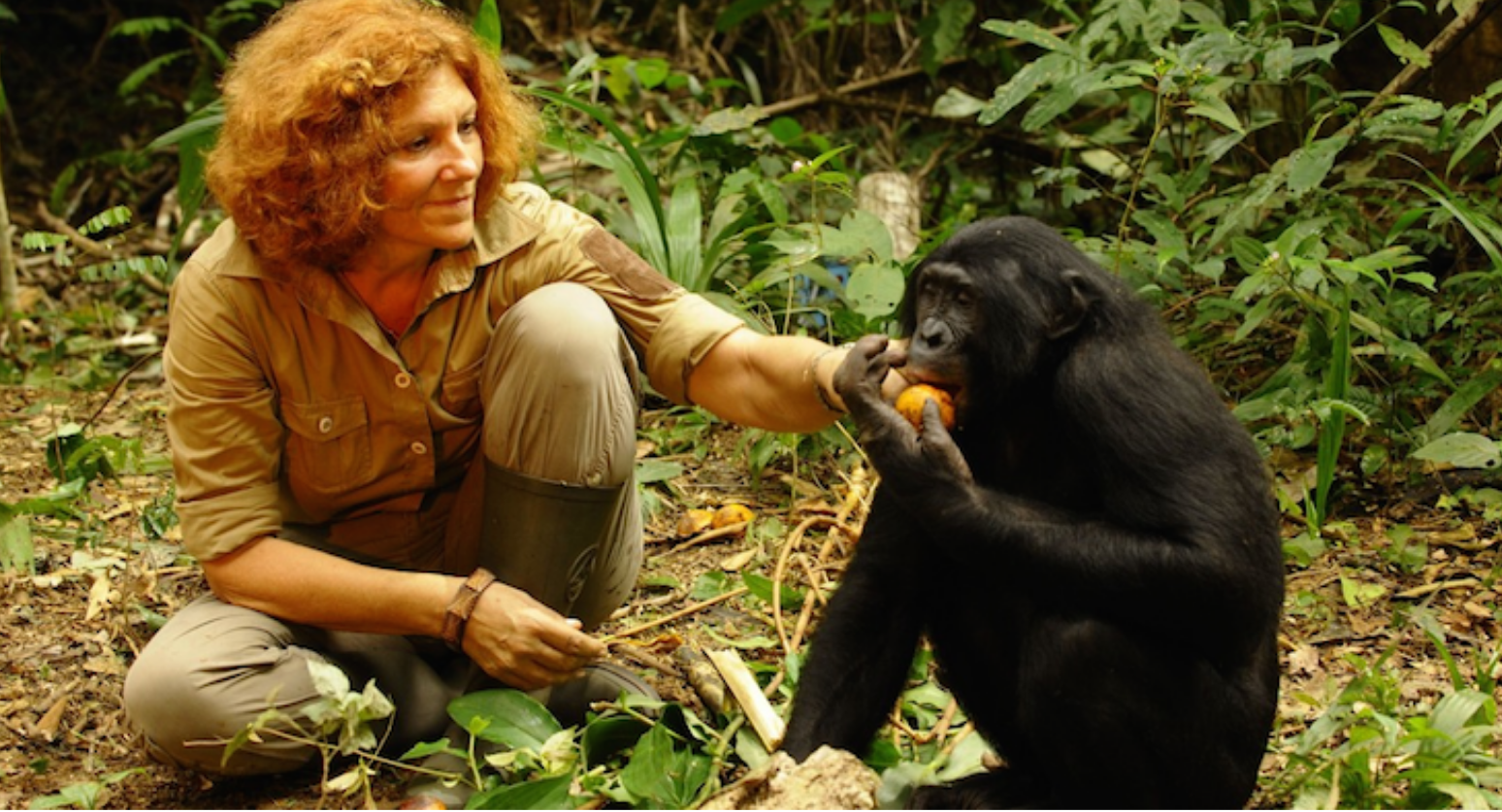 Claudine with one of the young rescued bonobos.
Today, Claudine’s daughter Fanny Minesi manages Lola ya Bonobo, as well as the release site Ekolo ya Bonobo. While Claudine spends time there as much as she is able to, she also travels around the world lecturing at conferences, universities and public venues to help spread the word about the plight of the bonobo. Her successes have brought her international recognition and numerous conservation awards. Claudine was the recipient of the first ever Commitment to Conservation Award from the Columbus Zoo in 2012. Included in this great honor was a gift of $50,000 as a display of gratitude for Claudine’s contributions and achievements in bonobo conservation. Claudine chose invest her prize money in a bus to bring her employees to the Lola ya Bonobo sanctuary. Many of the staff live in the city of Kinshasa, but traveling to the sanctuary can be a 30-45 minute drive over difficult terrain. Now the Lola staff have comfortable and reliable transportation to facilitate their work with this incredible species.

PASA is proud to have Lola ya Bonobo as one of its members and is honored to work with Claudine Andre as she continues her mission to let the world know about this incredible great ape species. If you would like to support Claudine and her team’s efforts to save bonobos, please visit her here. 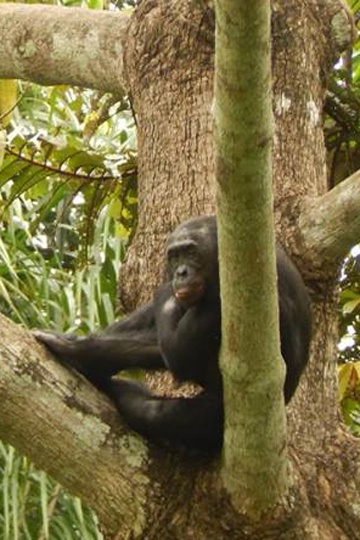 A rescued bonobo, now an adult, lounges in an enclosure at Lola ya Bonobo. (Photo by Natasha Tworoski.)

← A Reflection on Claudine Andre, a Hero for Bonobos – Part I Strengthening Our Community Through Collaboration →
PASA